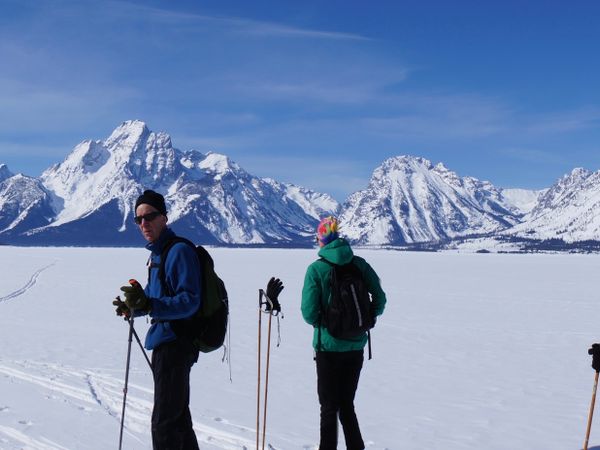 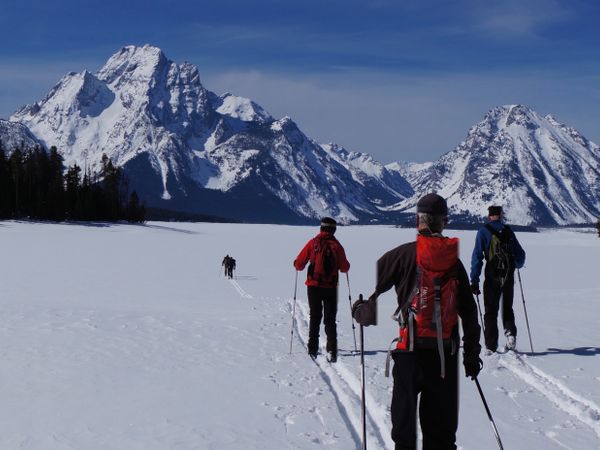 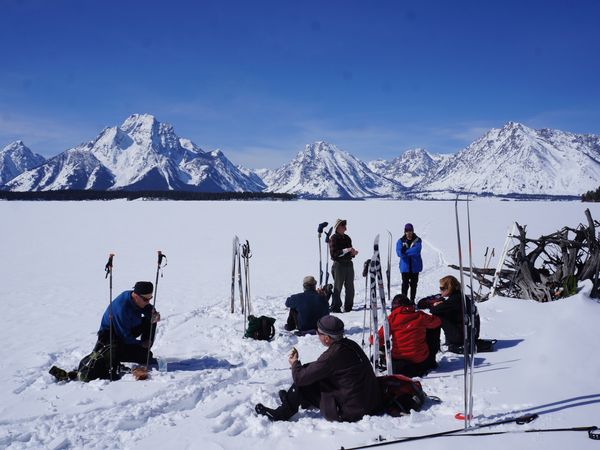 Access via: Drive north on Hwy 89 to Moran Junction, turn west toward the GTNP Entrance. Drive north-northwest 10.6 miles to the Colter Bay parking lot. Facilities are closed, except for the restrooms, so bring your own water and food.

“Island hopping” or touring around some of the islands on the east side of Jackson Lake is a flat, easy classic ski, with stunning views of the entire Teton Range. Best on a sunny day. Be sure to test the lake to be fully frozen – usually after 3 weeks of below freezing temps. Typical season is from late December to early April.

From the Colter Bay parking lot, the trailhead begins on the south end, near a Park winter trail sign. Depending on the number of days since the last snowfall, there may or may not be a cross country ski track heading south across a meadow with sparse trees. Bear right (west) to follow the trail along the shore of Colter Bay (an arm of Jackson Lake) Ski down onto the frozen lake and continue southwest, paralleling the shoreline. After approx. 500 yards, continue straight toward the open section of Jackson Lake, leaving the shoreline (which curves away to the left). Pass another promontory of land on your left and the lake opens up as you continue to ski southwest.

Views open up across Jackson lake toward Mt Moran, and on a clear day, are absolutely stunning. Distant views south west of the Grand Teton and Cathedral Range (Grand Teton, Mt. Owen, and Mt. Teewinot) can be seen.

On a clear day, one can ski out toward the middle of Jackson Lake. Our “Island hopping” tour follows the shoreline on the left around to the south, into Little Mackinaw Bay. Cut across the bay for the shoreline due south, in between the main shore on the east and a little unnamed island on the west. Continue south toward Sheffield Island, another small island west of the mainland. Follow the mainland coast around to the left, now heading southeast toward Half Moon Bay. Elk Island, the largest island in Jackson Lake looms large in the southwest. Hermitage Point (another beautiful cross country ski adventure trail) is straight ahead, to the south-southeast.

Stop along the way for a picnic, to take in the wide and expansive views of the Teton Range. We found a dead tree on the shoreline to perch on, or bring a lightweight pad or emergency “blanket” to sit on.

To complete the circle journey, head east into Half Moon Bay, keeping the shoreline of what appears to be an island (though not named, thus assumed to be part of the mainland) on your left. The frozen lake surface narrows as the bay opens to the north. Depending on the level of the lake, you may need to ski up and over a small section of land, to regain the frozen lake on the north side, which then reconnects with Colter Bay and the earlier ski track. Follow the shoreline now on your right back into the marina section of Colter Bay, and return to the car park.