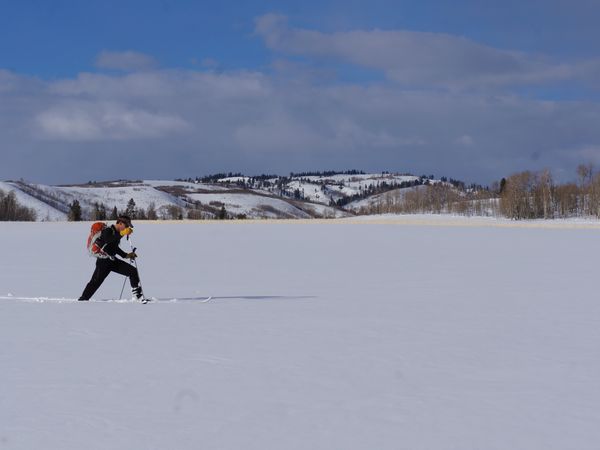 From the parking lot on the Gros Ventre Road, cross over the wooden fence at the west end of the parking lot. Follow a skier-tracked or untracked trail north, following a natural, sagebrush sided gully. The trail rises gently, yet progressively, passing the occasional cottonwood. The trail passes a number of side gullies, however, continue north and upward until rising up onto a wide plateau. The far end ( ½ mile) are the golden Kelly hayfields, site of earlier wheat and hay farming. On the distant ridge to the north, Coyote Rock can be seen, and reached if one wishes to extend the easy outing into a longer route with more climbing. Elk often winter here, and signs of elk herds bedding down identified by their tracks, scat, and snow disturbance. This trail in the western foothills of the Gros Ventre Range offer magnificent views of the Tetons and solitude in wide open vistas. Since the trail lies just within the eastern boundary of Grand Teton National Park, dogs are not permitted.

Return via the same route.