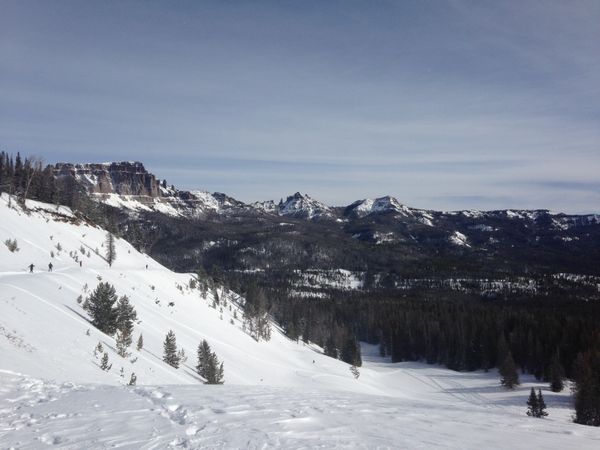 Access via: Drive north from Jackson on Hwy 89 N to Moran Junction, head right (east) toward Dubois on Hwy 287 to the summit of Togwotee Pass (55 miles). Parking area is on the right (south).

Brooks Lake and Brooks Lake Lodge make a lovely day-ski destination for a hot lunch and stunning views of the Pinnacles. This trail runs through the Bridger-Teton National forest, and is quiet during the week, but the first and last sections may have snowmobile traffic on the weekends.

Starting from 9500 feet at the top of Togwotee Pass, one avoids the 850 ft climb up to the lake via the main Brooks Lake Road (see trail) by following the “Barbers Point Road” which cuts a near level traverse along the mountain side.

Beginning at Togwotee Pass summit (parking area), cross the road to the north side and climb up onto the snow bank to put on classic XC skis (this avoids having to ski along the side of the road (Hwy 287) for the first 1/3 mile).
Ski in the snowmobile tracks paralleling the road heading east (toward Dubois) and slightly downhill. On the roadside is a wood sign for a picnic bench, and 50 yards north, off the road, is a wooden forest service bathroom structure. A small outline of a frozen lake can be surmised in a hollow. East of this, the tall orange trail poles/markers can be seen, marking the trail. The trail is usually groomed for snowmobiles at this stage, unless recent snowfall has covered up the wide groomed track.

Take this trail to the right (east), and follow it for approx. 1.5 miles, winding gently through conifer forest and occasional open spaces. The groomed trail at this point is wide enough to ski 3 abreast, making it social for a small group. The snowmobile trail markers make a right, downhill turn and drop down into a wide open meadow basin. The Barber Point Road trail continues straight as a skier track on the same level. Take this skier track to save distance and keep on the same elevation. The snowmobile track, while tempting due to its smooth grooming, will also take you to Brooks Lake, but is longer by 1.6 miles, and has significantly more ups and downs. The GPS map for this trail in fact show both variations, as we skied out on the Barbers Point road following the mountain contour (thus flatter), and returned by the hillier, longer snowmobile groomed track (much more of a workout).

The Barber Point Road will take you, at mile 3, through a gap in the mountain, at which point the views open up with Lava Mountain (volcano shaped) to the south, the upper Wind River Valley (south-east), and ahead The Pinnacles (part of the Absaroka Range) . On a clear day, the distant northern peaks of the Wind River Range may also emerge.

Just after the gap, the trail cuts across an open steep slope (though the trail itself is still a full jeep trail width), so you may want to traverse this section one at a time if snow slides seem likely. Shortly after this, the trail returns to winding through the forest as it descends gradually over 2 miles to Brooks Lake. Part way along, the groomed snowmobile track merges again with the Barber Point trail, and the final descent is on smooth snow.

Brooks Lake Lodge offers a varied menu for lunch – from 11:30-2 –no reservations (except perhaps for a large group).

Return via the same route, either variation, or one can ski back along the main Brooks Lake Road to the highway, having left a car or hitchhike back to Togwotee Pass.

See http://www.brookslake.com/ for more information on the Lodge and region.