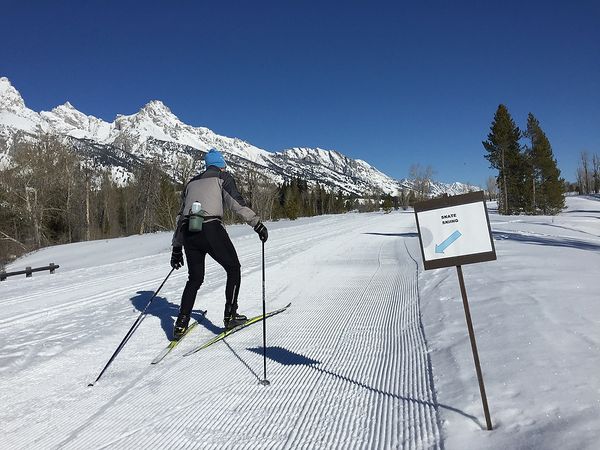 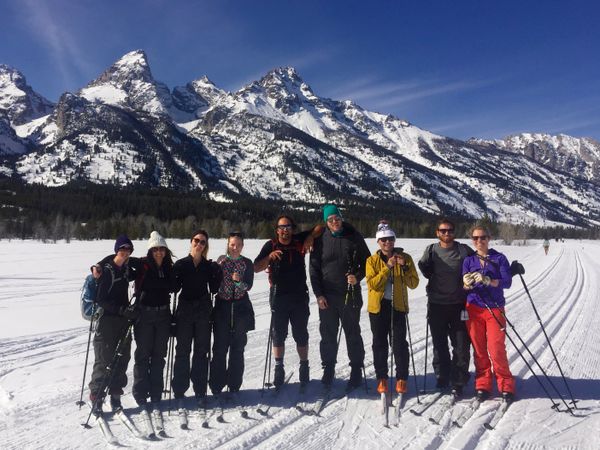 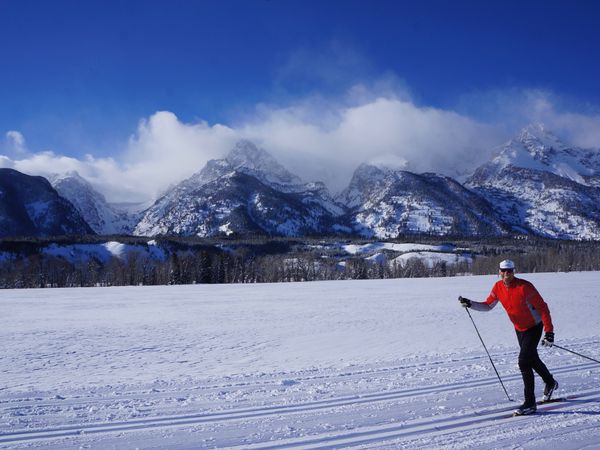 Access via: Drive north on WY Hwy 89 from Jackson to Moose. Take the Inner Grand Teton National Park road 3 miles north past the GTNP Entrance (bring your pass – NPS fee applicable) to the Taggart Lake Trailhead parking. Note: the road is plowed up to this point.

The Taggart to Jenny Lake groomed Nordic ski trail is one of the most beautiful, iconic Nordic ski trails in North America (and perhaps the world, but we’re biased ☺ ) With spectacular views of the highest peaks in the Tetons in Grand Teton National Park, this groomed trail is flat, easy to ski and accessible for even beginning skiers.
The trail is groomed for Skate skiers, classic Cross –country skiers (2 parallel tracks sides by side), as well as a walker/snowshoe track on the west side of the trail, where dogs may be brought on leash.

Thanks to the generous sponsorship of the Grand Teton National Park Foundation, the trail is groomed twice a week –Tuesdays to/from Taggart to Jenny, and Fridays from Taggart to Jenny Lake then on north to Signal Mountain and back. We encourage everyone enjoying this trail to make a donation - small or large - to GTNP Foundation to support winter grooming. Go to GTNPF.org, click on "donate" and note: "Grooming" to help sustain this unique, amazing trail.

The track may be skied as an “out-and-back” so it can be as short as you like, or as long as 14.4 miles one-way (28.8 mikes round-trip). The distance out to south Jenny Lake is 9 miles round-trip.

Begin at the north end of the Taggart trailhead parking lot, at the start of the groomed Teton Park Road. Remember not to walk in the skate or classic track section of the trail if you are on-foot. Dogs are permitted on leash only. Please respect the wildlife and give them as much space and quiet as possible, should you come across some.
After 1/4 mile, the wide, groomed trail crosses the Cottonwood Creek bridge and continues north with vast, open views of the Tetons on the left (west) and Gros Ventres Range on the distant right (east) framing the valley of Jackson Hole. The Snake River bisects the valley to the east, though not really visible from this trail, running north to south with twists and braids. Watch for the occasional sighting of moose.

The trail continues north paralleling the Teton Range, traversing large sagebrush meadows on both sides.
In the spring, when the snow surfaces develops a crust from the overnight melt-freeze cycle, the snow crust sets up firmly enough to ski on top of it – “Crust-Cruising”. This transforms these expansive meadows into near endless terrain for Nordic skiing – both skate and classic.

As you ski north, you will pass summer roads (now snow-covered) on the left heading toward the American Alpine Club Climbers Ranch, then the historic Russell and Geraldine Lucas Cabins. The Russell Cabin was named for the son of Geraldine Lucas, and served as the office and summer home to Rockefeller's agent, Harold Fabian, in the 1940's to 1985. Fabian helped to purchase and preserve land eventually turned into Grand Teton National Park. The Geraldine Lucas cabin sits just north of the Russell Cabin.

The Lucas-Fabian Cabins make a nice side trip or even a lunch destination, where the front porch is out of the snow.
Continue north and pass the summer access road for Lupine Meadows on the left (west), and Timbered Island (mile long island of dark conifers) on the right (east).

At 4.5 miles, come to the South Jenny Lake wood sign. Views of Tewinot Mountain, Mt. Owen, The Grand Teton directly opposite are truly magnificent. The groomed trial continues north from here to North Jenny Lake, then Signal Mountain ( a further 10 miles to the northern trailhead/plowed road).

Note that the all Jenny Lake Stores and ranger station are closed in winter. So bring your own water and food.

Turn around here and enjoy the view in the opposite direction (now heading south), As one skis south, the ridge south of Garnet Canyon, south of the Grand Teton, including Nez Perce, Cloudveil Dome, and the South Teton stand out.

The return ski is flat to slight downhill, though take note that sometimes, a southerly wind may come up , creating a headwind on the return leg. As always, bring an extra layer or shell parka in case the weather changes suddenly.