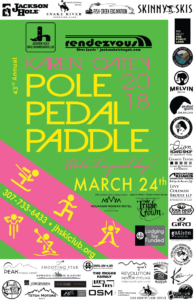 The five-leg race starts on Jackson Hole Mountain Resort and finishes at Astoria Hot Springs Park in Snake River Canyon. The race, where contestants compete either individually or in teams, consists of an alpine ski/snowboard leg, a short running leg, a cross-country ski leg, a bicycle leg, and a boating leg. The PPP is the third and final event in JHSC’s  Triple Crown Series and a one of our biggest fundraisers of the year.  JHSC, the town of Jackson’s oldest non-profit, is dedicated to providing attainable alpine, Nordic, and freeride (snowboard & freeski) programs to Jackson’s youth.

You’ll make a direct impact on the work we do
in providing accurate and trusted info on all things Nordic.

🎿Did you know that there are only 3 more Master

🎿🐕Friendly reminder: We all want to have fun

The KHOL team was out on backcountry nordic skis e

“Our sister was visiting from out of town – so

XC ski to Phelps Lake, then to Jenny Lake 📸: Re

The Spud Chase hosted by @tvtapidaho was a great s